Neal Adams, if one were to only see iconic covers, is often credited for drawing Superman exploding free from chains which have bound his arms at his sides, but the powerful image actually dates back to Fred Ray’s cover for Superman #11 from July 1941. Neal Adams, however, popularized the motif by making the chains Kryptonite, instead of iron.

In 1959, Adams had tried to find freelance work at DC Comics when he was fresh out of high school at the School of Industrial Art in Manhattan, but he was turned away. Ironically, however, Neal Adams would later draw many iconic covers for Batman, Superman, Deadman and other characters for DC Comics. More ironically, few artists have homaged their own work as often as Neal Adams (except for perhaps Todd McFarlane).

Undeterred by DC’s lack of interest, Adams found work at Archie comics, where he drew three or four sample pages of the Fly, Archie Comics’ fledgling super hero, and finally found himself breaking into the comic industry. His first published panel, cut from one of these sample pages, appeared in Adventures of the Fly #4 (January 1960). Afterward, Adams began writing, penciling, inking, and lettering humorous full-page and half-page gag fillers for Archie’s Joke Book Magazine. Adams soon left Archie Comics and found work in advertising and in comic strips, most notably in the syndicated Ben Casey, based on a popular medical-drama television series of the period.

Adams later found work at Warren Publishing, first as penciler and inker of Archie Goodwin’s eight-page story “Curse of the Vampire,” which appeared in Creepy #14 (April 1967). He and Goodwin soon collaborated on two more stories in Eerie #9 (May 1967) and Creepy #15 (June 1967). Adams approached DC Comics again at this time, where he felt he might be able to take over Joe Kubert’s art duties in DC’s war titles. Adams debuted at DC as penciler-inker of the 8½-page story “It’s My Turn to Die” in the anthology series Our Army at War #182 (July 1967). He did a smattering of additional horror and war stories, respectively for Warren and DC, and — after being turned down by the editor of DC’s Batman — was assigned to The Adventures of Jerry Lewis #101 (July–August 1967) and its full-length story “Jerry the Asto-Nut.” Adams continued to draw for The Adventures of Jerry Lewis and The Adventures of Bob Hope, another licensed title.

Before the Silver Age of Comics (1956 – 1970) drew to a close, Adams was assigned his first superhero cover, drawing DC’s flagship Action Comics #356 and Superman’s Girl Friend, Lois Lane #79 (both published in November 1967). That very same month, Adams drew his first DC superhero story, “The Elongated Man,” in Detective Comics #369, DC’s flagship Batman title. Adams soon drew Batman himself, along with the Spectre, on the cover of The Brave and the Bold #75 (January 1968) – the first published instance of Adams’ work on what would become two of Adams’ signature characters. Adams first interior artwork featuring Batman was “The Superman-Batman Revenge Squads,” which appeared in World’s Finest Comics #175 (May 1968). Adams’ breakout character, however, would be Deadman when he succeeded co-creator artist Carmine Infantino for the 17-page story “An Eye for an Eye” in Strange Adventures #206. Adams continued working on covers and stores for Stange Adventures through issue #216 (February 1969), also taking over scripts with issue #212.. His cover for Strange Adventures #207, featuring Deadman — like many of Adams’ coversm including Superman #233 — has become iconic in the industry. As Adams took over the title, the series became a fan sensation, winning many awards and being almost immediately inducted into the Alley Award Hall of Fame, where Adams himself received a special award “for the new perspective and dynamic vibrance he has brought to the field of comic art.”

As he continued to freelance for DC, Adams in 1969 began freelancing for Marvel Comics, whose title X-Men was on the verge of cancellation. Adams first pencils for Marvel appeared in X-Men #56 (May 1969), and he wrote and penciled the horror story “One Hungers” in Tower of Shadows #2 (Dec. 1969). Adams continued working on X-Men through X-Men #65 (February 1970).

Adams never left DC Comics, although the staff at DC was annoyed at his work for Marvel. Adams likewise continued to provide work for Warren’s black-and-white horror comic magazines, including “Goddess from the Sea” in Vampirella #1 (September 1969). At DC, Adams collaborated on Batman with writer Dennis O’Neil, a collaboration which revitalized the character and reestablished Batman’s dark, brooding nature, taking the books away from the campy look and feel of the popular 1966–68 ABC TV series. Their first two stories were “The Secret of the Waiting Graves” in Detective Comics #395 (January 1970) and “Paint a Picture of Peril” in Detective Comics #397 (March 1970). Adams helped introduced new characters to the Batman mythos, beginning with Man-Bat (co-created with Frank Robbins) in Detective Comics #400 (June 1970). O’Neil and Adams’ introduced Ra’s al Ghul — an adversary which, like the infamous Joker, has endured and appeared in several of DC’s Batman films — in Batman #232 (June 1971). O’Neil and Adams revived Two-Face in Batman #234 (August 1971) and revitalized the Joker in “The Joker’s Five-Way Revenge!” in Batman #251 (September 1973), a landmark story bringing the villain back to his roots as a homicidal maniac who murders people on a whim and delights in his mayhem. 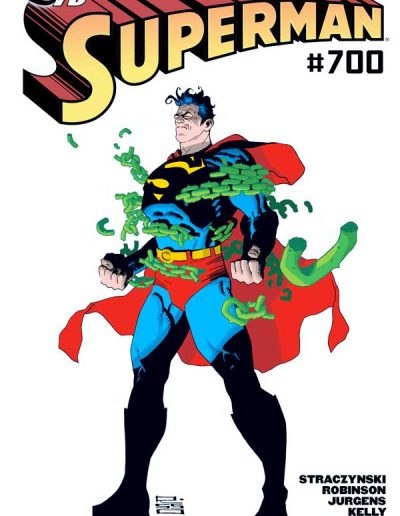