Be notified when comics are added

The Marvel Zombies first appeared in Ultimate Fantastic Four #21 (September 2005), followed by Marvel Zombies (January 2006). In Marvel Zombies 2, 40 years have passed since the events of the original Marvel Zombies mini-series and the zombie heroes return to earth after eating just about everything else in the known universe. They decide to repair the device first built by Reed Richards in the Ultimate Fantastic Four run to cross-over to other dimensions, giving them a limitless supply of food. On earth, the Black Panther has ruled over New Wakanda, a sanctuary for all remaining humans. Will the returning zombie heroes create a farm at New Wakanda to grow a steady supply of humans for food? Will they repair Reed Richards’ inter-dimensional portal for access to a never-ending food source? You gotta read Marvel Zombies 2 to find out! 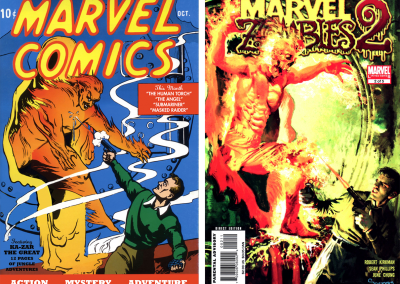